When a person is injured in a car accident, he or she has two options for recovering compensation: file an insurance claim, or sue the driver who was at fault for the accident. 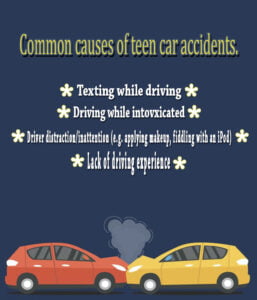 But what happens when the driver at fault is a minor?  Do his or her parents assume responsibility for the injuries and expenses resulting from the crash?  And just how often are teenage drivers involved in accidents, anyway?

Statistics on Teenaged Drivers and Car Accidents in OK

The Oklahoma Highway Safety Office (OHSO) publishes annual reports on automotive accidents throughout the state, breaking crashes down by factors like location, weather conditions, cause of accident, and age of driver.  The following data is taken from a 2014 OHSO car accident report, the most recent version available at the time of this writing:

Compare this data against OHSO figures from 2013:

When Are Parents Liable for Injuries Caused by Their Minor Children?

Once a teenager turns 18 years old, he or she becomes a legal adult.  However, drivers who are 16 or 17 years old are considered minors, which changes some of the legal considerations.

So, does that mean injury victims are simply out of luck when a teenager causes a car accident?  Not necessarily.  When a person is injured in a crash involving a minor, the injury victim may be able to obtain compensation not from the teen themselves, but by filing a claim with the teenager’s insurance company.

As for filing a lawsuit, the plaintiff’s likelihood of success depends largely on the extent to which the parents knew that their son or daughter was using the car.  An Oklahoma Supreme Court decision from 1924, Stumpf v. Montgomery, can shed light on this matter.  In Stumpf, the Court found the following:

“In an action against the owner of an automobile to recover damages for an injury inflicted by the negligence of the minor child of such owner, in driving the automobile, the plaintiff is not entitled to recover, unless the injuries were the proximate result of the negligence of the driver and unless such driver was the agent or servant of the defendant and was at the time of the accident acting within the scope of his employment or agency.”

In other words, when a plaintiff sues a car’s owner (i.e. the mother or father) after being injured by a minor driver, the plaintiff does not have a right to compensation unless both of the following are true:

If you were in a car crash caused by a teen driver, you may be able to recover compensation to help with your current and projected medical bills, losses of income, and other expenses and hardships that were caused by your injuries. Hasbrook & Hasbrook can help. Our highly knowledgeable legal team brings more than 75 years of combined experience to every case we handle, and has obtained favorable outcomes for countless car accident injury victims in the OKC area.  Call our law offices at (405) 605-2426 to talk about your case in a free and completely confidential legal consultation.  We serve residents of Moore, Edmond, Norman, and more.