Texting while driving is against the law throughout the state of Oklahoma, effective Nov. 1, 2015. The law prohibits drivers on any Oklahoma street or highway from typing a text, email or “electronic message.”

The law makes texting while driving a “primary offense.” That empowers officers to pull over drivers whom they suspect are texting. If it were merely a secondary offense, the officer would have to have another reason, such as speeding or reckless driving, to make the stop.

Violation is punishable by a $100 fine.

Here is the first paragraph of Oklahoma’s texting while driving law:

“It shall be unlawful for any person to operate a motor vehicle on any street or highway within this state while using a hand-held electronic communication device to manually compose, send or read an electronic text message while the motor vehicle is in motion.”

Many questions will emerge as Oklahoma drivers become aware of (and receive citations under) the new law, as officers begin to enforce it, and as state and municipal judges are called upon to interpret it. Here are some answers. 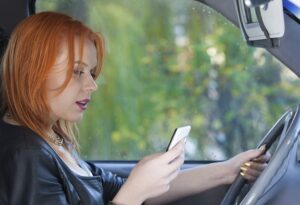 Email (electronic mail) is clearly prohibited. The other language seems to prohibit posting to social networks or doing any other manual electronic communication. The tragic fatality (see below) that led to adoption of the law occurred when a driver was posting to his Facebook page.

It is unlawful “to manually compose, send or read an electronic text message.” A key word in that phrase is “manually.” If what you are doing requires one or both hands, such as typing a message or pressing a button to open a message, you are breaking the law.

That’s exactly the way it should be. It is dangerous for a driver’s hands to be busy with something besides the steering wheel. But much more importantly, typing or punching buttons requires visual attention, which means taking one’s eyes off the road.

That’s how tragic accidents happen, like the one in January 2015 that killed one Oklahoma Highway Patrol trooper and seriously injured another (see below).

What about dictating a message?

Speech-to-text messaging is specifically permitted under the law, which says:

“This term does not include a device that is physically or electronically integrated into a motor vehicle … or a hands-free device that allows the user to write, send or read a text message without the use of either hand except to activate, deactivate or initiate a feature or function.”

If your smartphone has speech-to-text functionality and you are able to use it hands-free, you are in the clear.

What about when I am stopped in traffic?

The law specifies that it applies “while the motor vehicle is in motion.” So how does that apply to a driver who is texting while stopped at a stoplight or in a traffic jam? This is a gray area that may result in some debate in state and municipal courts.

According to various news reports, an official in the Norman city attorney’s office said the new law prohibits messaging at a stoplight, because the driver still needs to stay alert. On the other hand, a Tulsa World report interpreted the law to allow texting at a stoplight.

The truth is, the law means whatever a judge says it means. This will have to be debated in one or more courtrooms before a legal consensus emerges.

Obviously, the Oklahoma Highway Patrol will be enforcing the law on state highways. Local law enforcement officers are also empowered to enforce state laws. However, doing so can be complicated. OKC police chief Bill Citty explained:

“We could enforce state law, but that would require us to make an arrest, make a report [and] have them post bond, because the city does not issue state citations. Basically, the officers wouldn’t go through the trouble of enforcing it, if they had to go through the state law versus writing you a citation.”

That is why some Oklahoma cities, including Oklahoma City, Edmond and Norman, have adopted laws at the municipal level that mirror the state law. That means when officers in those cities write a ticket for texting while driving, the driver will answer in municipal court. That is usually more convenient for both the driver and the officer, compared to answering in district court under the state law.

The state texting while driving law says: “Municipalities may enact and municipal police officers may enforce ordinances prohibiting and penalizing conduct under the provisions of this section.” If they do, the law says, the municipal ordinances must have the same provisions, be no more stringent, and the fines cannot be any higher.

Have other states banned texting while driving?

Oklahoma was one of the last U.S. states to ban texting while driving. Forty-five other states already had such laws. 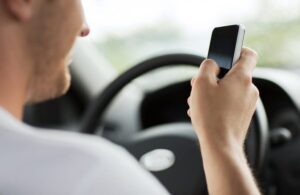 As of October 2015, the last four hold-out states, which continue to allow a driver to risk people’s lives by fiddling with their electronic gadgets while operating a moving vehicle, are Texas, Montana, Missouri and Arizona (according to the Governors Highway Safety Association).

In Honor of Troopers Dees and Burch

On that Saturday evening at around 10 p.m., Troopers Dees and Burch responded to an accident on I-40 in Seminole County. The troopers were on the side of the road working the accident when they were struck by a vehicle driven by a man who was busying posting to his Facebook page.

Dees was just 30; Burch was 27. The two had graduated from the OHP academy less than two years previously.

The driver, Steven Wayne Clark, Cushing, 29 at the time of the accident, pleaded guilty to first-degree manslaughter. Sentencing was set for Dec. 8, 2015.

The $100 fine, as well as the manslaughter charge when a fatality has occurred, are penalties under Oklahoma’s criminal law. But criminal law does nothing to compensate victims for their harms and losses. That requires a civil lawsuit.

If your family has experienced a fatality, serious injury or other loss in a car crash that involved texting while driving or some other form of distracted driving, you need to learn your rights and claims under civil law as soon as possible.