Important Legal Disclaimer: These dollar values are from past results and do not guarantee or suggest that your matter will have a similar outcome. The facts and circumstances which led to your injury are likely to be different, and an attorney can provide specific guidance only after engaging in a fact-intensive analysis. Furthermore, the worth of your personal injury case will ultimately be decided by a jury.

Regardless of whether a burn is caused by fire, electricity, friction, chemicals, radiation, or scalding liquids, the bottom line for the victim is always the same: agonizing pain, emotional distress, and financial hardship resulting from medical bills. If you or one of your loved ones suffered a second, third, or fourth degree burn in the Oklahoma City area, you may be entitled to compensation to help cover your losses and expenses.

The attorneys of Hasbrook & Hasbrook have assembled this short legal guide to help burn victims and their loved ones gain a clearer understanding of how compensation works in personal injury lawsuits. If you have any questions about anything you read in this guide, we encourage you to call our law offices at (405) 605-2426 for a free and private legal consultation. We are proud to serve clients throughout the Oklahoma City area, including Bricktown, the Plaza District, Deep Deuce, Automobile Alley, and Edgemere Heights.

How is Compensation Determined in a Personal Injury Lawsuit?

Severe burns cause constant and excruciating pain, especially when they are being treated. The recovery process of debridement and skin grafting is notorious for being nearly as agonizing, if not more agonizing, than burn injuries themselves. Once the grueling recovery process is finally completed, there is always a risk that the patient’s body will reject the new graft, leading to complications such as bleeding, numbness, and infections. 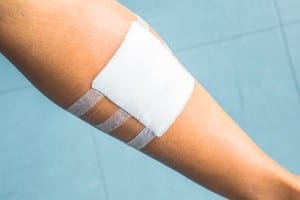 On top of these devastating physical effects, scarring and disfigurement often lead burn victims to struggle with severe depression and poor self-esteem, especially if they are children or teenagers. Enormous medical bills – and the ever-present risk of needing additional surgeries in the future – only aggravate this already overwhelming situation.

Furthermore, depending on which area of the body is affected by the burn, the victim may be unable to return to work at his or her old job. The individual may have to take a lower-paying position, move to a different company, or end their career and their professional dreams. They may then need to apply for disability benefits, which is a lengthy and complicated process with a high statistical rate of denials and rejections.
All of these factors will be weighed when determining what sort of compensation is necessary to provide the plaintiff with adequate care. Economic and medical experts are frequently called upon to provide testimony about current and projected bills and losses, so that the jury verdict or out-of-court settlement will be sufficient not only in the present day, but also in the long-term. If the burn victim was previously supporting a spouse and/or children, the verdict or settlement should reflect the costs of providing for a family.

Compensation, or damages, in a lawsuit can be “economic” or “non-economic.” Economic damages involve clear, quantifiable values, such as the cost of skin graft surgery or the financial loss of being out of work for a certain number of months. Non-economic damages attempt to place a dollar value on more abstract and intangible losses, which are often the greatest losses of all. Examples of non-economic damages include loss of enjoyment of life, emotional trauma, and the pain and suffering felt by the victim.

To reemphasize the disclaimer at the top of this page, the following verdicts and settlements do not necessarily reflect the financial outcome of every burn injury case. We present them here purely for educational purposes.

Don’t Delay – Consult With Us Today

If you suffered a second degree burn, third degree burn, or fourth degree burn because of a car accident, a defective product, an industrial accident, or medical malpractice, you may be able to recover significant compensation to help cover current and future costs related to your accident. Call Hasbrook & Hasbrook at (405) 605-2426 to schedule a free, completely confidential legal consultation today.