If you are involved in an automobile accident case, you may be wondering if evidence of your bad driving record, 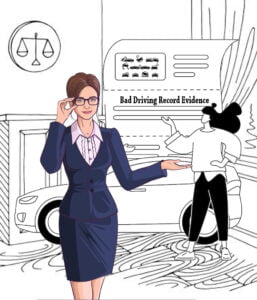 or the defendant’s, is admissible. Conventional wisdom would imply that a person with a bad driving record is more likely to cause an accident, so a jury should get to hear about that. Of course, it’s called “conventional wisdom” instead of just “wisdom” because it’s usually wrong, as it is in the case of evidence of a bad driving record. With few exceptions, evidence of either driver’s past moving violations will not be admissible in your car accident case.

Bad Driving Records Fall Under the Prior Bad Acts Rule

In civil cases, “prior bad acts” are not admissible to prove that a party committed a bad act in the current case. This is true for bad driving records, such as multiple speeding tickets or failure to yield citations. Just because someone sped in the past does not prove that they were speeding at the time of your accident. While this information can (and for the most part will) be obtained through discovery, it will generally not be admissible at trial.

Bad Driving Records Can Be Admissible Under Certain Circumstances

While the general rule is that the parties’ driving records are inadmissible to prove that either party drove negligently at the time of the accident, these records can be admitted for other purposes. For example, if the defendant screws up at trial and testifies about how great a driver he is, he has just opened the door for his bad driving record to be entered into evidence to counter that assertion. The driving record is not being submitted to prove that he drove negligently the day of your accident. It is merely to challenge his assertion (which was obviously meant to convince the jury that he was not negligent).

The same is true if the person falsely volunteers that he has never had a moving violation. In that case, the driving record evidence would be introduced to impeach the driver’s credibility.

A third exception to this rule is if a party’s driving record includes a felony conviction, such as a felony DUI or vehicular manslaughter conviction. These convictions, if they occurred within the last 10 years (this time frame can vary from state to state) would be admissible to impeach the defendant’s overall credibility, and really have nothing to do with the fact that they were vehicle-related. All convictions for felonies or “misdemeanors involving dishonesty” (such as fraud) are generally admissible against any party to impeach credibility.

What About Evidence of Prior Accidents?

As with evidence of moving violations, evidence of prior auto accidents is not admissible to prove fault for the accident in your lawsuit. 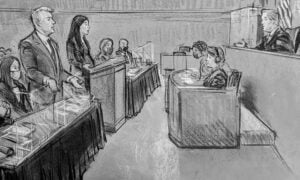 However, if you as a plaintiff were involved in prior auto accidents which resulted in injuries, these may be admissible to prove that you had a pre-existing injury. Your attorney can try to convince the judge to exclude this evidence if your injuries were only minor, or were related to a different part of the body than that which you are claiming was injured in your current lawsuit. Your attorney may be able to limit the evidence to the mere fact that you were injured, and exclude the fact that the injury was from a car accident. Of course, if you were not the driver in any of the older accidents, it shouldn’t be a concern. If you were the driver, excluding as much information as possible about your prior auto accidents is the safest bet.

Summing up, juries are usually not allowed to hear evidence of prior bad driving by either party, unless it is submitted for a legitimate purpose other than to prove a party’s negligence in the current lawsuit.