It’s a situation that unfolds on roads across America every day.  A driver is minding their own business, traveling down a quiet street, when suddenly it happens – a loose dog runs out into the 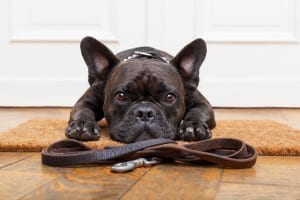 middle of the street, causing the driver to swerve and crash.  Fido is fine – but the driver isn’t.  Now they’ve got a broken arm, not to mention considerable damage to their vehicle.  So who is responsible in this situation?  Is a dog’s owner liable for compensating the injured driver when their pet causes an accident to occur?  Or is the accident victim stuck with the bill?  We will explain some key points about liability for auto accidents caused by loose dogs.

Oklahoma Leash Laws: Who is Liable When a Dog Causes a Car Crash?

Dogs and humans have been inseparable for thousands of years.  Without dogs’ early role in herding, hunting, agriculture, and warfare, human history would have followed a very different course.  Time has only made the connection stronger, with the American Society for the Prevention of Cruelty to Animals (ASPCA) estimating that more than a million dogs are adopted from shelters throughout the U.S. each year.

While dogs can be man’s best friend, they can also cause serious injuries when they are not properly leashed or fenced in.  When an animal suddenly runs out into the road, most drivers’ natural instinct is to veer out of its path.  That’s good news for the animal, but not so helpful for the driver, who is likely to crash into a mailbox, tree, ditch, telephone pole, or oncoming vehicle.  Alternately, the driver might react by slamming on his or her brakes – which will probably cause a rear-end collision with the vehicle following behind.  Regardless of whether a driver’s immediate reaction is to swerve or stop, vehicle damage and personal injury are both likely outcomes.

But does that mean the dog’s owner is liable?  For the answer, one must turn to Oklahoma’s leash laws.  (Keep in mind that every state’s leash laws are different.  If you’re not a resident of Oklahoma, you should check what your state’s statutes say about dog ownership and liability for injuries.)  Here’s what the applicable statutes say about leashing your dog in Oklahoma:

Dog owners have a duty to comply with state laws and applicable local ordinances.  If a dog’s owner carelessly violates the law and allows their dog to roam freely despite the safety risks, they could potentially be held liable for resulting injuries.  Not only does this include dog bite injuries – for which Oklahoma dog owners have “strict” (automatic) liability under 4 O.S. § 42.1 – but also Oklahoma truck accidents, motorcycle accidents, and other types of automotive accidents.  Had the owner followed the law and restrained their dog properly, the preventable crash – and resulting injuries – would never have occurred.

That being said, courts have returned conflicting rulings in cases involving personal injury liability for dog owners.  For example, in Williams v. Hill (1995), the Supreme Court of Alabama ruled that defendant William Hill was not liable for a motorcycle crash caused by his Golden Retriever Buddy Bear because the dog did not have an extensive history of chasing motor vehicles.  However, in Laylon v. Shaver (1992), the Appellate Division of the Supreme Court of New York ruled that defendant James Shaver was liable for a bicycle accident caused by his Doberman Pinscher, because Shaver was negligent in allowing the dog to roam freely.

Ultimately, it is impossible to determine whether you have an injury claim without personally examining the details unique to your case.  If you crashed your car to avoid hitting another person’s dog, you may have a right to compensation for your income losses, medical bills, and other losses resulting from the collision.  Call us today at Hasbrook & Hasbrook at (405) 605-2426 right away to set up a free legal consultation.